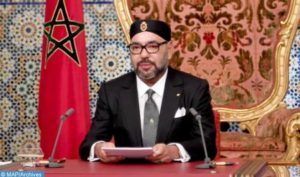 King Mohammed VI has reiterated Morocco’s firm and earnest commitment to the political process for the settlement of the Sahara issue, conducted under the aegis of the United Nations.

“Morocco remains resolutely and earnestly committed to the political process, under the exclusive aegis of the United Nations Organization,” said the Monarch in a speech addressed to the Nation on Monday on the occasion of the 20th anniversary of his enthronement.

“Morocco is also clear in terms of its fundamental convictions: the way to achieve the desired settlement can be none other than through Moroccan full sovereignty and within the framework of the autonomy initiative,” he said.

The celebration of Throne Day is an opportunity to reiterate “our unwavering commitment to the Moroccanness of the Sahara, to our national unity and territorial integrity, and to full sovereignty over every inch of the Kingdom’s territory,” the monarch stated.

He also expressed satisfaction over the achievements accomplished by the North African country at the United Nations, and at African and European levels. Yet, “we need to remain mobilized across the board to consolidate these achievements and face up the plots of our adversaries”, underlined the King.

King Mohammed VI seized this opportunity to reaffirm Morocco’s sincere commitment to the policy of the outstretched hand towards Algerian brothers, out of loyalty to the bonds rooted in brotherhood, religion, language and neighborliness that have always existed between the peoples of the two sisterly countries.

“This was shown recently by the sincere and spontaneous manifestations of friendliness and support expressed by Morocco – its King and its people – for the Algerian national football team at the African Cup of Nations held in our sister country, Egypt”, said the Sovereign.

Moroccans shared in the Algerian people’s joy and pride when their national team deservedly won the Cup, underlined the King, saying that this makes him upbeat and hopeful that “we can work for the fulfilment of Maghreb peoples’ aspirations for unity, complementarity and integration.

In November 2018, the Monarch had called on Algeria for a dialogue to iron out all the differences marring bilateral relations.

King Mohammed VI had then deplored the state of Moroccan-Algerian relations and called for a direct and frank dialogue in order to settle the transient and objective differences impeding the development of relations between the two countries.