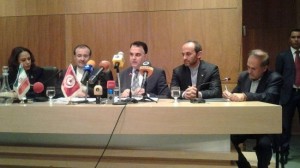 Iran and Tunisia have decided to increase their cooperation, with regards to their maritime affairs, with the signing of several documents, at the end of the third meeting of their joint committee for port and maritime cooperation. The meeting was successful in paving the way for a more intense bilateral port and maritime cooperation between the two countries.
Navy officials from the two countries met in Tehran, to discuss means of improving the transportation of goods between them through their ports. They have also consented to revive and develop their cooperation overseen by the joint committee for port and maritime cooperation. A Memorandum of Understanding was signed in this vein to reinforce the sisterhood of Tunisian and Iranian ports.
Iran and Tunisia have concluded a commercial shipping agreement in the past but it has been almost dormant. They have now agreed to work together in implementing the agreement.
The navy officials were also able to conclude a Memorandum of Understanding with regards to the recognition of maritime certificates delivered by their respective countries, and work together in developing each other’s maritime potentials, linked to the transportation of goods between their ports.
Public companies were also part of their discussions. Henceforth, the Islamic Republic of Iran Shipping Lines (IRISL) and Tunisia’s state-owned shipping line (CTN) will enjoy nurturing an expanded cooperation between them. However, certain agreements such as safety and firefighting have been agreed upon, but will be signed by executive officials from Tunisia and Iran.
The fostering of bilateral maritime and port relations will serve as boost to Tunisia because Iran is among the world’s top renowned member countries of the International Maritime Organization (IMO) and boasts of the biggest fleets in the Middle East.