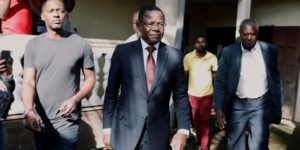 A military court in the country’s capital, Yaounde, ordered the former presidential candidate’s release on Saturday at the behest of President Paul Biya.

The activists of the Movement for the Renaissance of Cameroon (MRC) celebrated the release of their leader, Maurice Kamto, whose first words to his suppporters were: “I will never betray you!”

Maurice Kamto was detained in the main prison of Kondengui after organizing protests in January against the results of last year’s presidential election.

The country’s long-time President Paul Biya, who is under intense international pressure over a sweeping crackdown on opposition parties, won his seventh term in office in polls in October 2018.

Maurice Kamto was his nearest challenger, with 14.2% of the vote.

Kamto’s release, along with the release of dozens of his supporters, comes as President Paul Biya is adopting a more conciliatory tone.

This week has seen what was dubbed a “Major National Dialogue” as the president tried to bring together different sides in the three-year conflict in Cameroon’s two English-speaking provinces.

Posted by Emmanuel Agbenonwossi on October 7, 2019. Filed under News, Zoom. You can follow any responses to this entry through the RSS 2.0. Both comments and pings are currently closed.