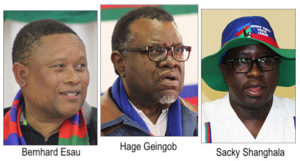 In a statement President Hage Geingob said that “following the severity of the allegations,” Fisheries Minister Bernhard Esau and Justice Minister Sacky Shanghala had tendered their resignations”.

Iceland’s public broadcaster reported on Tuesday that fisheries group Samherji had made illicit payments worth millions of dollars to secure fishing quotas in Namibia.

The Namibian newspaper quoting Wikileaks, pinpointed Essau, Shanghala as masterminds of a Namibian fishing license donated to the Angolan government but ended up benefiting a few individuals.

The documents are dated from 2010 to 2016, the period during which the company gained its foothold in Namibia, and include e-mails, internal reports, spreadsheets, presentations and photos.

They “expose how the company spent millions of dollars in pay-offs to senior Namibian officials and politicians in order to ensure [a] growing and continued access to the country’s resources”, according to WikiLeaks. Samherji has now become the single biggest recipient of fishing quotas in the country, it is claimed.