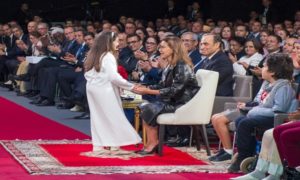 The 16th edition of the Moroccan National Congress on the Rights of the Child was held in Marrakech last week with the participation of some 3,000 attendees, highlighted by the adoption of a roadmap drawing a series of priority actions to protect children.

The National Pact for Children by 2030 was signed by all concerned ministerial departments, the parliament, civil society activists and private sector representatives.

The event, whose closing session was chaired by Princess Lalla Meryem, chairwoman of l’Observatoire National des Droits de l’Enfant (ONDE), reviewed the achievements made and discussed the setting up of the appropriate framework to uphold children’s rights.

The main idea floated is to put the child at the heart of a new dynamic that federates the maximum of energies for far-reaching actions across Morocco and at the international level, particularly in Africa. By placing the child at the heart of their national priorities, Morocco and Africa will be able to face up, under the best conditions, the challenges of the 21st century.

Participants agreed that it was time to take concrete actions and implement inclusive strategies, encompassing the economic, political and cultural dimensions.

During the congress closing session, Executive Director of the ONDE, Mrs. Lamia Bazir, made a presentation on the National Pact for Children or Roadmap 2030.

“This pact is not only a roadmap but it triggers a disruption in the methods of managing childhood issues,” she said, noting that the roadmap promotes new results-based governance and new management tools.
During the session, Ms. Bazir presented the “African Cities Protecting Children” toolkit to Mr. Jean-Pierre Elong Mbass, Secretary General of United Cities and Local Governments-Africa.

In a video message, UNICEF Executive Director Henrietta Fore, expressed thanks to Princess Lalla Meryem for organizing the 16th National Congress of Children’s Rights, and commended King Mohammed VI for his steadfast commitment and commendable actions for the defense and promotion of the rights of the child.

During the event, Senior Advisor in the Office of the Executive Director of UNICEF Geert Cappelaere handed to Princess Lalla Meryem the UN Champion Generation Unlimited Prize, awarded to her by the United Nations, in recognition for her efforts to promote and protect the rights of the child.

The Congress closing remarks were made by Morocco’s ambassador to the UN and Chairman of the Executive Board of UNICEF, Omar Hilale.

He highlighted the efforts made by the ONDE, which speeded up the implementation of Morocco’s commitments within the framework of the Convention of the rights of the child and underlined the role of the Parliament of the Moroccan child as a model of generational, participative, inclusive and preparatory democracy of the Moroccan citizen of tomorrow.

Omar Hilale said the appointment of Princess Lalla Meryem UNESCO goodwill Ambassador came in recognition of her humanitarian efforts and commitment to the promotion of children’s education.