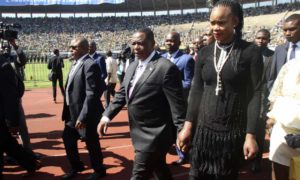 The wife of Zimbabwe’s vice president has been charged with attempting to kill her husband.

Mary Chiwenga, the wife of Vice President Constantino Chiwenga, appeared at the Harare Magistrates Court Monday where she was also charged with money laundering and fraud.

Police documents allege that in July the Second-Lady went to the private hospital in Pretoria where he was being treated and told staff to leave her alone with him before disconnecting vital equipment. When security personnel and medical staff intervened, she left the hospital, the documents claim.

Constantino Chiwenga, who played a leading role in ousting Robert Mugabe in a military takeover in 2017, has a serious disease of the oesophagus, which has made eating difficult and has required months of hospital treatment.

Mary Chiwenga is accused of laundering about $1m to neighboring South Africa by pretending to pay for goods that were never brought into Zimbabwe, according to the charges. She was arrested by security forces on Saturday.

The commission has pursued a series of high-profile figures in the last year, jailing several of them.