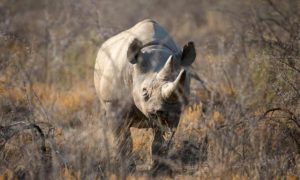 Fausta, the world’s oldest black rhino died in the Ngorongoro crater in Tanzania, at the age of 57.

The female rhino, named Fausta, died of what is believed to be natural causes on December 27 in a sanctuary, after living most of her life in the wild, the Ngorongoro Conservation Area Authority said in a statement last weekend.

“Records show that Fausta lived longer than any rhino in the world and survived in the Ngorongoro, free-ranging, for more than 54 years” before she was moved to a sanctuary in 2016, said the statement.

“Fausta was first located in the Ngorongoro crater in 1965 by a scientist from the University of Dar Es Salaam, at the age between three and four years,” it added.
Ngorongoro estimates the life expectancy of rhinos to be between 37 and 43 years in the wild, while they can live to older than 50 in captivity.

Today, all five species of rhinos are perilously close to extinction. The rate of their decline is truly astounding: in the decade of the 1970s alone, half the world’s rhino population disappeared. Today, less than 15 per cent of the 1970 population remains, an estimated 10,000 to 11,000 worldwide.

According to the World Wildlife Fund, if rhino poaching increases at a steady rate African rhino won’t last until the end of this decade. Poachers receive about $5,000 for a single horn in areas where the average monthly salary is $200.