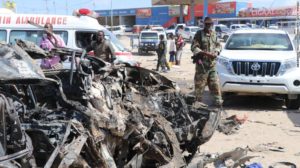 A car bomb exploded Saturday at a busy checkpoint in the Somali capital, Mogadishu, leaving at least 79 people dead and scores more wounded. Many of the victims were students. Other civilians and soldiers are among the dead, police said.

UN chief António Guterres has condemned the attack that he described as “a horrendous crime”, according to a statement issued by his spokesman.

Perpetrators behind the deadly terrorist attack in Somalia on Saturday must be brought to justice, the UN Secretary-General has said.

“The Secretary-General reiterates the full commitment of the United Nations to support the people and Government of Somalia in their pursuit of peace and development,” said the statement.

The top humanitarian official in Somalia also joined the Secretary-General in condemning the attack.

Adam Abdelmoula, who is a Deputy Special Representative at the UN Assistance Mission in the country, UNSOM, took to Twitter to underline the Organization’s solidarity with the Somali people and Government.