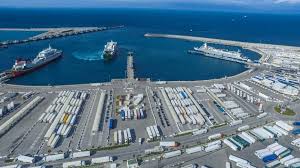 The Tanger-Med port complex posted in 2019 a 38 pc growth in container traffic and shipping compared to activities recorded last year. After Tanger-Med 2 terminal became operational, the port’s complex handled in total over 4.8 million containers in 2019, says the port activity report.

The year 2019 was marked by the start of PSA vehicle exports through Tanger Med port from the Kenitra plant.

Trucks traffic is also picking up. 357,214 trucks were handled in 2019 at Tanger Med port, a growth of +9 pc compared to 2018. Exports are mainly driven by industrial and agri-food products.

Thanks to the implementation of an optimized ship call management system, Tanger Med port welcomed nearly 800 mega-ships (over +299 metres in size), up by +9.9 pc compared to the previous year.

In 2019, 10 new operators have started their activity in the Tanger Med port logistics zone, including international players such as DHL, Nippon Express and Kasai.

All of these achievements confirm Tanger Med’s position as the prime platform serving the Moroccan economy and as a major logistics hub for global trade.