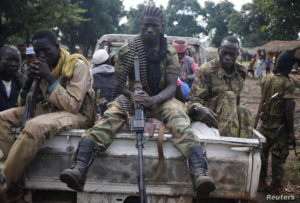 In Central African Republic (CAR), clashes between armed groups have killed 38 people and forced several hundreds out from their homes, local authorities said on Tuesday.

According to the United Nation’s peacekeeping mission, known as MINUSCA, the clashes broke out on Saturday in the eastern town of Bria between different ethnic factions of the ex-Seleka armed group FPRC.

A regional prefect Evariste Binguinendji said about thirty-eight were killed based on a body count at the local hospital, but the death toll could be closer to 50.

At least 5000 people have fled the area following the fighting. As of Monday, some order has been restored; the UN and local armed forces are patrolling the area. However, tension remains high, according to local media.

The Central African nation has suffered recurrent bouts of civil conflict since December 2012, which has led to hundreds of deaths and almost 700,000 internally displaced persons (IDPs), and has pushed more than 500,000 people to seek refuge in neighbouring Cameroon, Democratic Republic of the Congo (DRC), and Chad.

Clashes between various armed groups continue to be reported, although a peace agreement between armed groups and the government was signed on February 6, 2019.

The CAR is now one of the world’s poorest and most volatile countries. The United Nations estimated in September that two thirds of the population depends on humanitarian aid to survive.

The country is ranked next-to-last after Niger on the 2018 UNDP’s Human Development Index, which compares longevity, education, and income per capita. Life expectancy is just 52.9 years.