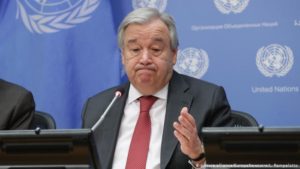 The United Nations Secretary General Antonio Guterres on Tuesday called the situation in Libya a “scandal”.

Speaking in a press conference in which he was critical of countries that last month met in Berlin to push for progress in Libya peace talks, the UN boss said he is “deeply frustrated with what’s happening in Libya.”

“The truth is that the Security Council (arms) embargo remains violated.”
Guterres called the mediation efforts of UN envoy to Libya Ghassan Salamé “the only good news” there.

High-ranking military officers from both sides in the Libyan civil war have held UN-sponsored talks in Geneva for the first time in an attempt to build a lasting ceasefire, Ghassan Salamé, has said.

The talks, likely to last all week, represent progress since for days Khalifa Haftar – the general who leads the self-styled Libyan National Army, based in the country’s east – had refused to attend.

Salamé said the goal of the talks was to turn a nominal truce into a lasting and sustainable ceasefire, covering the removal of heavy weaponry. He said he was working to bridge the gaps between the two sides on the terms of a ceasefire first agreed in principle at the behest of Turkey and Russia.

The talks between the two sides were not face-to-face on the opening day, Salame said.

The UN security council is still working on a resolution demanding the ceasefire is respected, Salamé said.