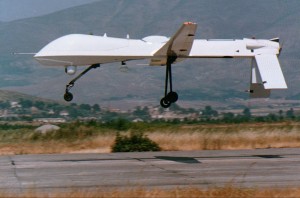 Washington is putting immense pressure on Libyan officials for the authorization of drone attacks on its territory according to a high-ranking Libyan official who wants to remain anonymous. The U.S is claiming that attacks will be directed towards Al-Qaeda. Libya is reluctant to give a green light to such operations.
The U.S is claiming that there are terrorists associated with Al-Qaeda operating in eastern Libya. Tripoli has not been able to verify the claims because it has not received enough information from Washington.
The source said that “we have not given our consent until now.” He confirmed that they are considering the request which is also coupled with “intense American pressure” but cited the fact that “Americans do not share their information and intelligence sources”, making it difficult for them to come to a conclusion.
U.S has been criticized for using drone attacks in the Middle East and Asia. Prior to his departure from office, former Libyan minister of defense Mohamed Al-Barghathi stated that they won’t conclude an agreement for drone attacks because the Libyan army should be responsible for fighting terrorists on Libyan territory. However, both countries have “military and political communications” existing between them.
It is highly possible that the U.S could bypass the Libyan authorities and launch attacks on its target. Reports have quoted residents in the eastern city of Benghazi saying that unidentified aircrafts have been noticed in the skies and at low altitude in recent weeks.
The assassination of U.S Ambassador Christopher Stevens and four of his colleagues in Benghazi have increased the surveillance of the region. The Libyan government is also concerned about the reaction of the public if it becomes the first North African country to authorize drone attacks on its territory.