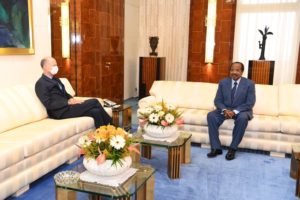 Since the outbreak of Covid-19 pandemic, President Paul Biya of Cameroon did not appear publicly or on media. Many rumors circulated on his health until his reappearance on Thursday.

Paul Biya made his first public reappearance on Thursday 16 April. This was on the occasion of an audience granted to the French ambassador to yaoundé, Christophe Guilhou. The audience took place at a time when speculation was running high on his health condition.

“I’ve just received the French ambassador. On the agenda of our exchange, the management of the Covid-19 pandemic in Cameroon, in France and in the world”, tweeted the Cameroonian president.

And to finish convincing the sceptics, a photo of the audience between the president and the French diplomat accompanied the tweet.