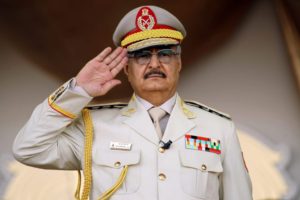 Libya’s renegade general Khalifa Haftar has officially declared he was withdrawing from the UN sponsored political agreement signed in Morocco’s Skhirate in 2015.

Haftar declared himself military ruler of Libya with a “popular mandate from the people,” while scrapping the UN deal as obsolete.

The deal between the warring factions led to forming a national unity government, which is now defending the Capital Tripoli from an offensive of forces loyal to Haftar.

The attack on Tripoli shattered hopes for a political solution as now Haftar declared himself military ruler of Libya with a “popular mandate from the people,” while scrapping the UN deal as obsolete.

“We announce our acceptance of the people’s will and mandate and the end of the Skhirat Agreement,” he said in a speech recently.

Haftar is supported by the United Arab Emirates, Egypt and Russia and the GNA is backed by Turkey and Qatar.

The GNA urged the eastern based Parliament to stand against Haftar’s authoritarian power grab.

“Haftar has once more exposed his authoritarian intentions to the world. He no longer seeks to conceal his contempt for a political solution and democracy in Libya,” Mohammed Ali Abdallah, an adviser to the GNA said in a statement.