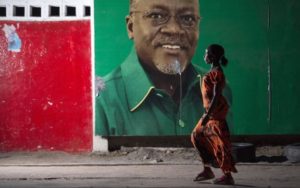 The Director of the African Union Centre for Disease Prevention and Control (Africa CDC), Dr. John Nkengasong, denies the Tanzanian president’s accusations that the screening tests sent to his country are faulty. “The tests that Tanzania and all African countries are using are tests that we have validated and we know they are very effective,” he told a news conference on Wednesday.
Head of State John Magufuli said last weekend that samples from a goat and a papaya, which he had secretly sent to laboratories across the country, tested positive. The president thus questions the reliability of the kits “imported from abroad”, and thus the official balance sheet of the number of contaminations in Tanzania. The kits were delivered by Africa CDC and the Jack Ma Foundation.
Hassan Abbas, Tanzania’s chief government spokesman, said the government had formed a team of experts to examine the lab that conducted the tests, and it would give the outcome of the results once completed.
Asked about Tanzania’s questioning of the tests, WHO Africa head Matshidiso Moeti said on a teleconference with the media: “We are convinced that the tests that have been provided … both through procurement through WHO and those that came through Jack Ma donations, were not contaminated with the virus.”