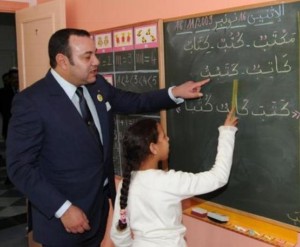 King Mohammed VI has openly criticized the current cabinet led by the moderate Islamist Party for Justice and Development (PJD) for its poor performance in the education sector, which is a key sector for the development of the country, and for stalling reforms initiated by previous governments.
The king made his remarks in a speech he delivered to the nation on Tuesday on the occasion of the 60th anniversary of the “Revolution of the King and the people,” which had triggered a fierce resistance against the French colonizer after the late King Mohammed V and his family were forced to exile in 1953.
The king who devoted practically the whole speech to the issue of education and vocational training deplored the current state of education which is, he said, “worse now than it was twenty years ago.”
“Considering the current state of the education and training sector, we need to pause, assess achievements and pinpoint shortcomings and inadequacies,” he said, stressing the importance of the National Charter for Education and Training, which was adopted through a broad-based national participatory approach few years ago.
“Successive governments have all worked on the implementation of this charter, particularly the last one (that was led by Abbas El Fassi from 2007 to 2011), which deployed all the necessary means and resources to implement the Emergency Program,” he said.
Blaming directly and openly the current cabinet, the King said “unfortunately, the gains made since this program’s implementation was started have not been consolidated. On the contrary, some of its basic components, namely aspects related to syllabus change, primary school curriculum and high schools of excellence, have been dropped, without consulting or coordinating with the parties concerned.”
The current minister of National Education had actually announced in July 2012, just few months after he was appointed to the position, that his department was dropping the program in view of its high cost (3.3 billion DH) and meager results.
For King Mohammed VI, « the current government should have capitalized on the positive experience gained in the field of education and training, especially as this is a crucial project that will span over several decades.”
“It hardly makes sense for each government to come with a new plan every five years, and disregard previous programs, particularly as no government will ever have the time, during a single mandate, to fully implement its project,” he insisted.
The king underscored further that the education sector “should not be included in the sphere of purely political matters, nor should its management be subjected to outbidding tactics or party politics. Rather, it should be part of a cultural, economic and social approach aimed at training and preparing human resources who can be incorporated into a dynamic development process, through an efficient education system.”
Although many significant achievements have been made in the area of education and training, as evidenced, in particular, by the increase in school enrolment rates, especially that of girls, and despite “the positive results achieved in the fields of vocational, handicraft and technical training,” the education sector is facing many difficulties and problems and the road leading to a performing sector that would actually play its role as an engine for the achievement of economic and social advancement is still long and arduous, the Moroccan ruler said.
The problems facing the sector are mostly due to the adoption of some syllabi and curricula that do not tally the requirements of the job market, he insisted, and deplored the fact that some obsolete subjects are still taught at some universities that he likened to “factories that produce unemployable graduates.”
After this frank diagnosis of the education and training system in his country, the King renewed his call on the government to reform the education system and implement the constitutional provisions regarding the Higher Council for Education, Training and Scientific Research.
“I call on the government to speed up the adoption of the necessary legal texts relating to the new council,” said the king who appointed on the same day his adviser Omar Azziman President of the Council that was set up in 2006.
The position had remained vacant since the death of another royal adviser Meziane Belfquih in May 2010.
The king urged Azziman to address this critical national issue, to assess the decade-long National Charter for Education and Training, to give an opinion and provide advice with respect to the various related issues, and to involve all stakeholders in the debates.
In his speech, he also stressed the need for “a broad-based, constructive debate on all the major issues of concern to the nation, in order to achieve the tangible results Moroccans are looking forward to.”
“What we do not need are sterile, disgraceful disputes which lead nowhere, except to settling scores, defamation and calumny. Such disputes only make problems more complex, instead of solving them,” the king said alluding to the provocative statements and verbal jousting exchanged between some government officials and politicians.