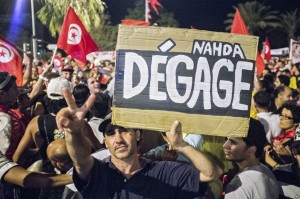 The Salvation Front, a coalition of secular political parties, is unsatisfied with Ennahda’s proposal for an all-party government and has preferred to go on a week-long protest to push it out of power. The protest dubbed as the “Week of departure” will be entering its third day on Monday. Ennahda has vowed that it will not bow down to such pressures.
The Salvation Front is claiming that the government is unable to assure the security of its citizens. Two high profile assassinations of prominent opposition figures this year have led to an outrage against the government. The protesters want the government to resign. Chants such as “The people want the fall of the regime,” “Get out!” and “(Rached) Ghannouchi assassin” could be heard in the crowd gathered in front of the National Assembly.
Last week, Ennahda announced that it was willing to pave a way for an interim technocratic government if all the political parties will be included in the government. On the contrary, the Salvation Front wants an apolitical government to take over from the Ennahda led coalition government. It described talks without the resignation of the government as a “waste of time.”
UGTT, the most powerful trade union, in the country is acting as the mediator between the parties. Its Secretary General, Hocine Abassi, said he hopes that they will arrive to “a solution responding to the interests of the nation above all, and which satisfies the different parties.” The weeklong demonstrations could be a setback to UGTT’s efforts, which plans to continue mediating between the parties.
The protests have been going on peacefully while Ennahda remains determined to stay. Political analysts believe that the success of the Egyptian Tamarod is serving as a motivation to Tunisians.