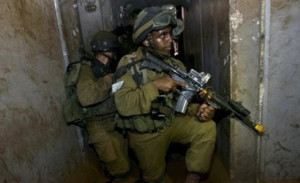 Secret peace talks between Palestine and Israel were shaken by the events which unfolded at the Qalandia refugee camp, southern edge of Ramallah. The Palestinian Authority postponed its session with Israelis on Monday as a protest to the killings which occurred at the camp. Palestinians are accusing Israel of trying to make the U.S.-led peace negotiations a failure.
The Qalandia refugee camp left 3 people dead, 15 wounded and 6 in critical conditions after a standoff between the refugees and Israeli security personnel. It is one of the deadliest in the West Bank since 2009.
Military officials claim that forces wanted to re-arrest Yossif Khatib, recently released from prison, because he is a “terror operative.” The situation degenerated into chaos when the youths obstructed the operation by throwing stones and cement blocks. Lieutenant Colonel Peter Lerner, a spokesman for the Israel Defense Forces said the killings were in act of “self-defense” because such “large violent crowds” outnumbering them left “no other choice but to resort to live fire.”
Mahmoud al-Aloul, the former governor the Nablus district and a member of the central committee of the Fatah political party said the event is a clear sign that “the occupiers do not want a peace process.” A local Muslim cleric said “the Israelis don’t want peace. They want to shed our blood.”
Spokesman Nabil Abu Rudeineh for President Mahmoud Abbas labeled it as “criminal acts” which are part of “the intentions of Israel’s government, and the actions it takes to foil the peace talks.” He urged Washington to intervene before the talks become a failure.
The U.S State Department spokeswoman Mari Harf said the “parties are engaged in serious and sustained negotiations” and denied that the Palestinians have cancelled a planned meeting.