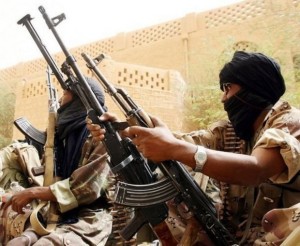 A group of militants led by Moktar Belmoktar has formed an alliance with the Movement for Oneness and Jihad in West Africa (MUJAO) with the zeal “to confront the Zionist campaign against Islam and Muslims” in North Africa. They are also willing to fight against secular forces and have vowed to support the Islamists in Egypt and in the region. Their alliance is called “the Mourabitounes.” Nouakchott Information Agency published the announcement of the alliance.
The alliance drew its inspirations from Al-Qaida and the Taliban. It saluted the leaders of Al-Qaida such as Ayman al-Zawahri and Taliban leader Mullah Mohammad Omar. Prior to the announcement, Belmoktar’s group and the MUJAO have been cooperating. The latest cooperated operation was in May when suicide bombers detonated car bombs in a Nigerian military camp in Agadez and in the remote town of Arlit at a French-operated uranium mine.
Moktar Belmoktar became popular when he confirmed that he was behind the deadly terrorist attack at the In Amenas gas plant attack in Algeria at the beginning of the year. He has broken away from Al-Qaida North Africa. Belmoktar will not lead the Mourabitounes.
MUJAO was formed by those who parted ways with Al-Qaida in the Islamic Maghreb in order to expand their activities into West Africa. It was formed in 2011 and it’s stationed in Mali.
The Mourabitounes are urging militants in all the North African countries to form a unified front. They are not pleased with the removal of Morsi from power in Egypt and have urged their followers to “cooperate   against the secular forces who reject all that is Islamist and who have forced the eviction of our Muslim brothers in Egypt.” They also threatened French interests.