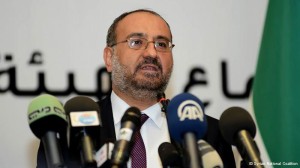 The newly chosen head of the Syrian National Coalition thirteen member cabinet has admitted that their major challenges are filling the administrative void left by Assad’s authority in rebel controlled regions, cropping the Al-Qaeda militants and ideologies from their midst.  Ahmad Tumeh was a political prisoner who has been chosen during the weekend to head the cabinet.
Tumeh, a seasoned politician, will be faced with uniting the different rebel groups under one umbrella. He lamented that “people pursued a basic quest for freedom [rather than] deeper despotism” as he blamed the rebels “behavior” for the peoples suffering despite their killings and displacement by the pro-government military.
Although he enjoys the support of some of the powerful men among the rebel ranks, his tenure in office will be very challenging. Unifying the rebels will be very difficult after Al-Qaeda’s leader, Ayman al-Zawahri, urged Islamist militants to avoid joining forces with other rebel forces. In a message released last week, he warned them against “coming close to any of these groups” that he described as “secular parties that are allied to the West.”
The United States, Europe, Saudi Arabia and Qatar have vehemently showed their support to the rebels but divisions among rebel groups have limited their efforts to remove Assad from power. Militants linked to Al-Qaeda are reported to be controlling the eastern provincial capital of Raqqa, with several towns in the neighboring province of Aleppo and in Idlib.
Ahmad Tumeh is hopeful of establishing a unified central administration in rebel controlled areas and justify that democracy is not in contradiction with Islam. He will soon be naming his ministers.
Al-Qaeda militants want to establish an Islamic Caliphate in Syria before raging on a transnational campaign to spread their ideologies.