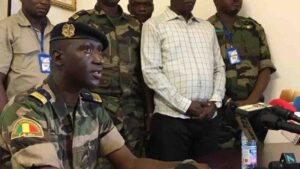 The national consultation promised by the junta, which took power on August 18, will take place Saturday.

The capital was rife with rumors of a new cancellation, after last weekend’s one, but the junta’s spokesman spoke on Thursday evening at its headquarters in the Kati military camp.

The speech of the National Committee for the Salvation of the People (CNSP) was very brief, not allowing to go into details. But it will at least have had the merit of putting an end to the rumors that had been circulating since Wednesday evening, maintained by Malian political leaders.

Colonel Ismaël Wagué, spokesman of the CNSP, confirmed that the national consultations would indeed take place, and that they would start this Saturday, but with a different format than initially envisaged: the consultations will begin Saturday, not only in Bamako, but also in the regional capitals of the country.

It is the governors who will be in charge of directing the work. The work will last only one day and will aim, in the words of Colonel Wagué, to “validate the terms of reference” of these consultations.

In other words, all the groups convened – political parties, civil society, trade unions, armed groups that signed the peace agreement – will have to validate the objectives of the upcoming discussions. Objectives that include the length of the transition period, the civilian or military character of the leaders. In short, all the points that Malians have been waiting to be set since the coup d’état more than two weeks ago.