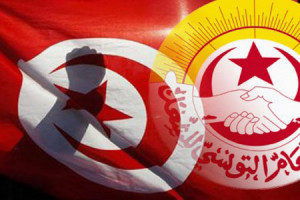 The spokesman of Tunisia’s powerful 800,000 strong UGTT members, Sami Tahri, has warned that “all options remain possible” as the trade union announces that it will be embarking on a countrywide protest due to the stalemate in the negotiations that it has spearheaded as a mediator. The government and secular opposition parties have been at loggerheads for months. The union blamed the government for the failure of the month long negotiations but acknowledged that there is a still a possibility to end the crisis.
UGTT is threatening to stage a general strike across the country to oblige the government to resign. The last time it staged a strike for a day, in July, the repercussions dragged the currency to a historic level low against the dollar. Hundreds of millions of dollars were also lost.
The Ennahda led coalition government has refused to succumb to the pressure of the opposition to resign and be replaced by a technocratic government. It rather suggested an apolitical government. UGTT seems to be supporting the opposition after negotiations became unsuccessful. It claims that Ennahda’s refusal to resign immediately remains the problem. It is planning to stage protests nationwide and then a huge rally in the capital to force its resignation as the general strike remains to be its last option.
UGTT seems to prefer a peaceful political transition but is worried that time is running out. Hussein Abassi, an official of the union, said they “can still wait for a few hours or days” for the government to resign adding that they “cannot wait for long.” The union claims that government can still step down because “the door is still open” for all those who want to avoid its “all options remain possible” warning.