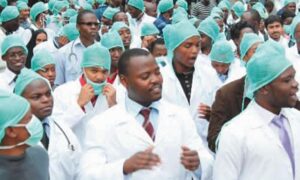 With a monthly salary of around 500 euros, the resident doctors of Nigerian public hospitals have been demanding an increase in their remuneration for several years. Africa’s most populous country and the continent’s leading economy finances health services to a small extent.

The National Association of Hospital Interns, which represents 40% of Nigerian doctors, is at the origin of the social movement.

In addition to the demand for wage increases, trade unionists are demanding the payment of arrears for 2014, 2015 and 2016. According to a 2017 survey conducted by NOI polls, Nigeria’s largest polling firm, nine out of 10 doctors were considering leaving the country because of poor salaries and abysmal working conditions. When given the opportunity, most of them try their luck by emigrating to Canada, the United States and the United Kingdom.