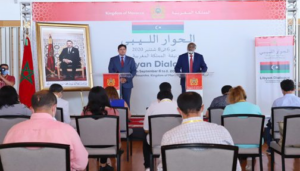 The political dialogue between the delegations of the Libyan High Council of State and the Tobruk-based Parliament is taking place in a “positive and constructive” way and “important compromises” have been reached.

This came in a joint statement read out Tuesday in Bouznika by the representative of the High Council of State, Mohamed Khalifa Najm, on behalf of the two delegations.

At the end of the third day of inter-Libyan talks, Najm said the two sides hope to achieve positive and concrete results that could pave the way for the completion of the process of a comprehensive political settlement across the country.

The discussions, he added, have resulted in important compromises, which include establishing clear standards to eradicate corruption and squandering of public funds and end the state of institutional division.
The Libyan official assured that both parties hope to achieve good and tangible results to put an end to the Libyan crisis.

The Libyan dialogue between the delegations of the High Council of State and the Tobruk Parliament, which started Sunday and may go on until Thursday or Friday aims to sustain the ceasefire, build trust between the Libyan parties, and pave the way for a lasting political solution that would put an end to the conflicts between the Libyan protagonists.

The two delegations praised the sincere will and the concern of Morocco to create an appropriate fraternal climate helping to find a solution to the Libyan crisis, likely to achieve the political and economic stability of Libya, make it possible to address the Libyan people’s hardships and to move towards building a strong and stable State.

At the end of the first day of their discussions, the two delegations expressed their sincere will to reach a consensus that will end the deadlock in Libya.

On Monday, the League of Arab States and the Community of Sahel-Saharan States (CEN-SAD) issued statements commending Morocco for the dialogue initiative and expressing their support to the move.

The United Nations, the European Union, and the African Union have also welcomed Morocco’s initiative to host the peace talks and end the Libyan conflict.

“The launch in Bouznika, under the sponsorship of Morocco and with the agreement of the United Nations, of talks between the representatives of the government of Tripoli and the Parliamentary Assembly of Tobruk is an important step forward in fostering the ceasefire and starting a process with a view to a political solution to the Libyan crisis,” said Piero Fassino, chairman of the Foreign Affairs Committee at the Italian Chamber of Deputies.

“The Bouznika talks constitute a precious opportunity which must be seized and supported by all those who pursue, like Italy and the European Union, the objective of a political solution guaranteeing peace, stability and security for Libya and the Mediterranean,” Fassino added in a statement.