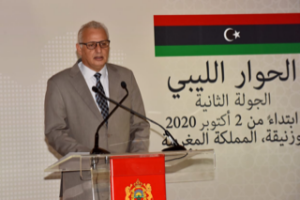 The second round of inter-Libyan talks between delegations of the High Council of State and the House of Representatives opened Friday evening in Bouznika.

The meeting is a further step in the series of discussions between the two parties to give a new impetus to the efforts and initiatives aimed at finding a political solution to the Libyan crisis.

The first round of discussions, held September 6 – 10 in Bouznika, a Moroccan Atlantic city to the south of Rabat, aimed at maintaining the ceasefire and opening negotiations to resolve the differences between the protagonists.

The meeting reached “a comprehensive agreement on transparent and objective criteria and mechanisms for occupying sovereign positions”. These include key positions such as those of the Central Bank, the head of the Anti-Corruption Commission, the chairman of the High Electoral Commission, the attorney general and the president of the Judicial Council.

The second round of talks is an opportunity to continue dialogue between the two parties “in order to complete the necessary measures to ensure the implementation and activation of the agreement” reached in Bouznika I, as was stated in the final joint statement issued after the first meeting.

Both parties had underlined in the statement that their discussions, which took place in “a friendly and fraternal atmosphere marked by understanding and consensus,” were based on their awareness of the country’s situation at different levels. The situation is deemed dangerous as it threatens the security, territorial integrity and sovereignty of the State, exacerbated by negative foreign interventions that revive wars and regional and ideological alignments.

The two parties had also stressed that these discussions took place in application of Article 15 of the Libyan political agreement reached in Skhirat in December 2015 and in confirmation of the conclusions of the Berlin conference supporting the political solution, and on the basis of the relevant Security Council resolutions.

The discussions were deemed necessary by both sides, which are aware of the dangerous repercussions arising from the political and institutional division that has caused the citizen to lose trust in the role of the legislative, executive and other institutions, due to the poor living conditions at all levels.

Morocco’s hosting of these meetings is a recognition of the Kingdom’s efforts to create the right conditions and a conducive climate for reaching a comprehensive political solution in Libya, in order to overcome the crisis in that country and achieve the hopes and aspirations of the Libyan people to build a civil and democratic State that enjoys peace, security and stability.

The Kingdom’s approach regarding the Libyan question, as specified by minister of Foreign Affairs, Nasser Bourita, at the opening of the first round of the inter-Libyan dialogue is that this issue should not be a diplomatic matter or the subject of political dissension, but rather one relating to the fate of a brotherly Maghreb country.

Morocco does not have an agenda or an initiative in Libya, has never accepted to choose between the Libyans, and will support any initiative that Libyan parties agree upon, Bourita had said, insisting that the Kingdom has not changed its position according to the evolution of the situation on the ground and always puts Libyans’ interests first.
In their statement, the Libyan rivals thanked Morocco for preparing conditions for finding a solution to the Libyan crisis in order to reach a consensus to achieve political and economic stability in Libya and end the suffering of the Libyan people.

Morocco’s “constructive and active” role in facilitating the Libyan dialogue has been widely welcomed and appreciated by Western and Arab capitals and by several international and regional organizations, notably the United Nations, the African union and the Arab League.