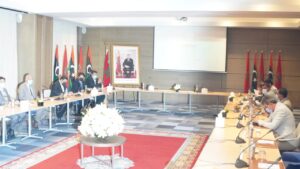 The resumption of the inter-Libyan talks with a second round meeting, which opened Friday evening in Bouznika between the delegations of the High Council of State and the House of Representatives, is a further step in the series of discussions between the two parties to give new impetus to the efforts and initiatives aimed at finding a political solution to the Libyan crisis.

If the first round discussions, held from September 6 to 10 in Bouznika, aimed at maintaining the ceasefire and opening negotiations to resolve the differences between the protagonists, and resulted in a comprehensive agreement on transparent and objective criteria and mechanisms to occupy positions of sovereignty, this second round meeting is an opportunity to continue the dialogue and resume meetings between the two parties “in order to complete the necessary measures to ensure the implementation and activation of this agreement”, as was reported in the final joint statement issued after the first meeting.

Both parties had stated in the statement that their discussions, which took place in “a friendly and fraternal atmosphere marked by understanding and consensus,” were based on their awareness of the country’s current situation at different levels. An extremely dangerous situation threatening the security, territorial integrity and sovereignty of the State, born of negative foreign interventions that revive wars and regional and ideological alignments.

The two parties had also stressed that these discussions took place in application of Article 15 of the Libyan political agreement reached in Skhirat in December 2015 and in confirmation of the conclusions of the Berlin conference supporting the political solution, and on the basis of the relevant Security Council resolutions. They were explained by their awareness of the dangerous repercussions arising from the political and institutional division that has caused the citizen to lose trust in the role of the legislative, executive and control institutions, due to the poor living conditions at all levels.

Morocco’s hosting of these meetings is a recognition of the Kingdom’s efforts to create the right conditions and a conducive climate for reaching a comprehensive political solution in Libya, in order to overcome the crisis in that country and achieve the hopes and aspirations of the Libyan people to build a civil and democratic State that enjoys peace, security and stability.

The Kingdom’s approach regarding the Libyan question, as specified by minister of Foreign Affairs, African Cooperation and Moroccan Expatriates, Nasser Bourita, at the opening of the first round discussions of this dialogue is that this issue should not be a diplomatic matter or the subject of political dissension, but rather one relating to the fate of a brotherly Maghreb country. He added that “Morocco has neither an agenda, nor an initiative or path and it has never agreed to choose among the Libyans. On the contrary, it still considers that the Libyans are brothers and that they take responsibility and put Libyan interests first.”

According to Bourita, a solution to the Libyan crisis is based on three fundamental principles, namely Libyan patriotism, the conviction that the solution can only be political and the confidence in the capacities of the Libyan High Council of State and the Libyan House of Representatives, as legitimate institutions gathering women and men capable of overcoming hardship and engaging in dialogue for Libya and in the interest of the country, with all the responsibility and ability to overcome circumstantial difficulties.

Indeed, Morocco’s “constructive and active” role in facilitating the Libyan dialogue has been widely welcomed and appreciated by Western and Arab capitals and by several international and regional organizations, notably the United Nations (UN) which “supports all initiatives that would advance and complement ongoing peace efforts to resolve the Libyan crisis, including the latest efforts of the Kingdom of Morocco which hosted the dialogue sessions between the High Council of State and the Libyan House of Representatives”.