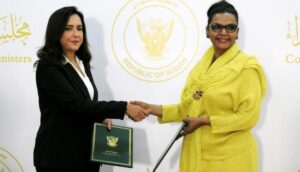 Sudan on Thursday signed a “historic” memorandum of understanding with General Electric, the U.S. power generation group. The agreement comes after decades of U.S. sanctions, with Sudan on the U.S. blacklist of countries that support terrorism since 1993. Between 1992 and 1996, the Sudanese dictator Omar al-Bashir welcomed the leader of the jihadist group Al Qaeda, Osama Bin Laden.
“We haven’t seen such a major company interact with Sudan in almost 30 years. This is what Sudanese Prime Minister Abdallah Hamdok said in a statement issued by the official agency Suna.
The Memorandum of Understanding with General Electric is expected to provide an additional 470 megawatts of electricity to cover the consumption of about 600,000 households. For this, three power stations will have to be rehabilitated.
Currently, 67% of Sudan’s 42 million people live without electricity. And those who have access to it often experience power outages that can last up to six hours. This agreement should therefore contribute “to meeting energy and health needs throughout Sudan”, said Mai Abdelhalim, General Electric’s General Manager for Northeast Africa.
This project between Khartoum and General Electric is an important first step for Sudan’s stricken economy, whose inflation reached a record 212% in September over one year. In an attempt to lift U.S. sanctions and encourage investment, the transitional government in power, since the fall of Omar al-Bashir in April 2019, has agreed to pay compensation claimed by the Americans for victims of attacks in several African countries, attacks that are attributed to Sudan.