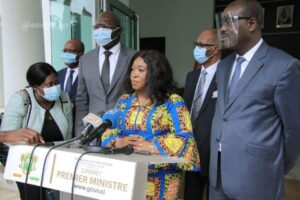 The ministerial mission of ECOWAS ended its two-day mission on Monday, October 19. In its final statement, the delegation of the Economic Community of West African States called for restraint but also invited Pascal Affi N’guessan of the FPI and Henri Konan Bedié of the PDCI to reconsider their watchwords of boycott of the electoral process and civil disobedience.
The statement was issued after a courtesy visit to outgoing President Alassane Ouattara and consultations with the Prime Minister, the opposition political parties, as well as several accredited ambassadors and members of the UN Security Council. It took place in a tense atmosphere. For several days, indeed, the violent clashes have resumed especially in the central-eastern part of the country but also in several neighborhoods of Abidjan.
She had first made an appointment to meet at the institution’s headquarters but it was finally, in a hurry, on the airport tarmac, that the ECOWAS mission made its final declaration. It was an interpreter, alongside the Ghanaian Minister of Foreign Affairs, Shirley Botchway, who read the conclusions of this visit.
“The mission urged the candidates to focus on realistic issues that would help resolve differences, with a view to inclusive, transparent, credible and non-violent participation in the presidential election. The mission urged candidates and political parties to make considerable efforts to reach an agreement on the presidential election.’’
In this short statement, the delegation also called on everyone to show tolerance and to avoid hate speech that could lead to violence. It also urged the PDCI and FPI candidates to reconsider their call for boycott and civil disobedience. On the PDCI side, the climate was tense following the statement, said an official. Nevertheless, the FPI welcomes this mediation. “ECOWAS is in its role. It asks that the dialogue be started and we are delighted”, explains Jean-Bonin Kouadio. The opposition platform is planning a joint official statement on Wednesday, October 21.