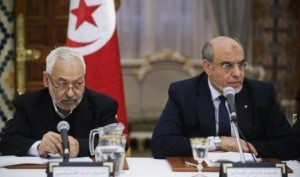 Opposition parties have signed an agreement deal with Ennahda to end the country’s political crisis at a ceremony held at the Palais des Congres. Some of the parties didn’t adhere to the deal. The ruling government will resign for a technocrat cabinet to take over the country. UGTT applauded the deal and appreciated the efforts of the parties after setting the blueprint for negotiations last week.
The government is expected to be replaced by technocrats in three or four weeks.  Abdelhamid Jlassi, one of the leaders of Ennahda, said “the government’s resignation will not be determined until the start of the real national dialogue” which is not expected to start this week. According to the agreement, “the government will resign with a delay not exceeding three weeks” after the first day of national dialogue. He described the party’s decision to resign after ruling the country for two years as “a major concession made in the interests of the country.”
The technocrats will be responsible for supervising the next elections and a four-week deadline has been fixed for adopting a new electoral law. They will be enjoying full powers to run the affairs of the state. Lawmakers also got the nod to complete the much awaited new constitution.
20 parties attested their signature to the agreement but parties such as the .Congress for the Republic (CPR), the Popular Petition for Freedom, Justice and Development among others preferred not to adhere to it.
Hassine Abassi, the head of UGTT, remained optimistic about ending the “useless state of polarization” after the “extremely difficult and complicated issue” the parties went through. He added that they will continue to remain neutral. He concluded by saying that “the door of hope for Tunisians” is being opened.