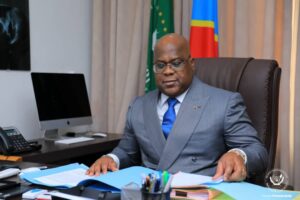 First day of national consultations promised by President Felix Tshisekedi. The Head of State of the Democratic Republic of Congo received this Monday, November 2, personalities involved in the electoral process. Institutions supporting democracy, civil society, religious denominations.
The first to be received were the members of the outgoing electoral commission, including Corneille Nangaa its president who, at the end of the interview with Felix Tshisekedi, recalled that his team was no longer legitimate to organize the next elections.
He insisted on the need to hold them in 2023, assuring even that he already had in his drawers a chronogram to organize them. But for that, recalled Corneille Nangaa, it is urgent to appoint the members of the new office of the Electoral Commission. But it is a stumbling block with the pro-Kabila coalition.
Among the other institutions consulted was the National Council for the Follow-up of the New Year’s Eve Agreement, an agreement that remained a dead letter. Its president, Joseph Olenghankoy, regretted that Felix Tshisekedi and Joseph Kabila could not speak to each other, he insisted on a dialogue excluding “extremists on both sides”.
“Our role here is not to come and tell lies to the one who has the destiny of the country in his hands. One would have wished that they had met first with his predecessor Joseph Kabila, that they could exchange without having the extremists on both sides and that they could talk about the problems in front of them.’’
The Congolese president returned with each delegation on the reasons for these consultations, his difficulties with his partner Joseph Kabila. He speaks of it as his “former ally”, noted some participants. Joseph Kabila still officially holds the majority in both houses of parliament. Less than two years after his investiture, Felix Tshisekedi fears for his balance sheet and does not hide it, he assures his interlocutors of his will to see the Congo change.
Meetings with religious representatives are also important since the appointment of the new president of the Electoral Commission depends on the eight recognized religious denominations. It should be noted that the other Cardinal Fridolin Ambongo, the Episcopal Conference and the Kibamguists will be received later in the week.