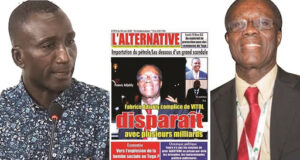 The bi-weekly newspaper l’Alternative and its director were sentenced on Wednesday, November 4 by the High Court to pay two million each for defamation. The decision arouses indignation for the Togolese press.
The newspaper published in its early June issue the embezzlement of nearly 500 billion CFA francs in the oil order for Togo. The financial director of the Price Fluctuation Committee filed a libel suit.
And the verdict came down very quickly, in the absence of most of the lawyers. The biweekly and its director are sentenced for lack of evidence to two million CFA francs each and to pay two million for moral damages to the plaintiff. This is full satisfaction for Mr. Eric Sossah, the plaintiff’s lawyer. “In matters of defamation, you cannot come to the bar saying “I have elements, but I cannot give them to you, I prefer to reserve them for the people”. By doing that, you are doing populist and demagogic activism and you are no longer doing journalism.’’
This decision is a farce, declares for his part Me Claude Amegah, lawyer of the newspaper l’Alternative. “Since we started this procedure, the way it was conducted gave a premonitory sign of the decision that could have been taken.’’
The committee to monitor fluctuations in the price of petroleum products is an automatic price adjustment mechanism set up by the government. Since 2011, the mechanism has been headed by a coordinator whose son is the administrative and financial director.
Upon publication of the article in June, an audit of the committee was requested by the Ministry of Commerce. Excerpts from the report of this audit have been making headlines in the press for the past few days. These are elements that can help the judge, insists Isidore Sassou, president of the patronage of the Togolese press who does not hide his indignation at this verdict. The lawyers filed an appeal as early as this Wednesday.