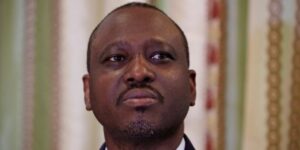 The trial of strength continues between the Ivorian government and its opposition. This Wednesday evening, former rebel leader Guillaume Soro, in exile in Paris, called on the Defense and Security Forces “to act”. While several opposition leaders are under house arrest, he said he is ready to continue the implementation of the “transition”.
In this speech broadcast on social networks, Guillaume Soro reaffirms the point of view of the opposition, on the vacancy of the presidential power. He announces that he is ready to continue, since his exile, the implementation of the transition. He also appeals to the constituted bodies and to the defense and security forces, which he asks to act.
“I ask you soldiers, non-commissioned officers, senior officers and general officers of our army to look at yourselves in the mirror of your soul and conscience and to act to stop the killings, to preserve our country from pogroms, to preserve peace and concord. To act to restore our Constitution to its former glory.’’
For the deputy spokesman of the government, Mamadou Touré, this speech is not acceptable: “The words of Guillaume Soro are extremely serious. Apparently Guillaume Soro has not given up. Moreover, we are surprised that these remarks could have been made on French territory and we hope that the French authorities will react.”
Guillaume Soro, the minister concluded, cannot continue to use French territory with impunity to destabilize Côte d’Ivoire.