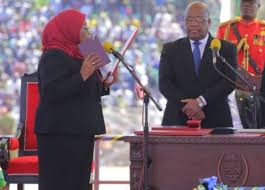 Re-elected with 84% of the votes on October 28, the outgoing president of Tanzania John Magufuli was sworn in on Thursday, November 5, in the presence of national and international dignitaries and regional heads of state including Presidents Museveni of Uganda, Azali Assoumani of the Comoros and Emmerson Mnangagwa of Zimbabwe.

Many fear that the magnitude of this victory coupled with that of the ruling party, which won 262 of the 264 seats in Parliament, could sound the death knell for the multiparty democracy and stability that have made the strength of this strategic country, located at the crossroads of southern and eastern Africa.

Against the backdrop of suspicions of fraud and vehement contestation of the results of last month’s presidential and legislative elections, the Tanzanian capital held this Thursday, November 5, the inauguration ceremony of John Magufuli. At the head of the country since 2015, the man was elected for a second term with 84% of votes on a nationalist platform coupled with promises of economic development and continued fight of his government against corruption, which has long gangrened the alleys of power in Dodoma.

The other big winner of these elections was Magufuli’s party, the CCM (Chama Cha Mapinduzi, the Party of the Revolution). In power without interruption since the country’s independence in 1961, this party, which was said to be losing momentum, took almost all of the 264 seats in the Tanzanian parliament. The CCM has also won by a large margin in the Zanzibar archipelago, which is part of Tanzania and has hitherto been regarded as a stronghold of the opposition.

Denouncing “electoral fraud on an unprecedented scale”, the opposition parties rejected the verdict. But as Tanzanian law prohibits them from challenging the presidential results in court, the opponents called on the population to demonstrate in the streets. They also filed a case with the Commonwealth, of which Tanzania is a member, asking the organization to publicly disavow the elections and suspend the country from the organization of English-speaking countries.

The US State Department for its part said it was “concerned about credible reports of electoral irregularities.”

John Magufuli is the fifth president to lead Tanzania since the former British colony gained independence in 1961. The country has long been a haven of stability in a troubled East African region.