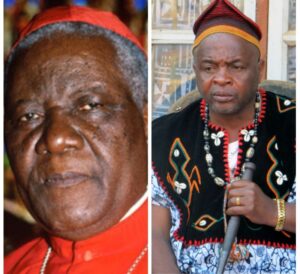 Cardinal Christian Tumi was kidnapped Thursday afternoon by a group of armed men on the road between Bamenda and Kumbo.

The kidnapping has been confirmed by the prefect of the department and Elie Smith, a close collaborator of the cardinal, was able to reach the kidnappers by telephone.

The king of Kumbo, the Fon of Nso, a traditional moral authority, was also kidnapped. A few days ago an armed group had also kidnapped teachers from a primary school in Kumbo who were released on Thursday Nov.5.

The cardinal and the king of Kumbo were intercepted at Baba, by a certain general of the Ambazonians, whose war name is Chaomao.

The son of the king of Kumbo also confirmed to Elie Smith that the kidnapper was Chaomao, a former pastor, who complained that the cardinal had encouraged the children to go to school. Because for them, if school starts, it’s a sign of normalization.