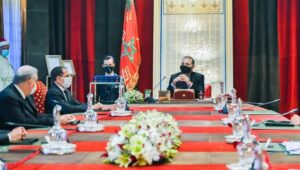 Morocco will launch, in the coming weeks, a large-scale vaccination operation against Covid-19 to end the acute phase of the pandemic.

The announcement was made by the Royal Office in a statement issued after King Mohammed VI chaired, Monday, Nov. 9, at the Royal Palace in Rabat, a working session on the vaccination strategy against the coronavirus.

This unprecedented nationwide operation aims to provide the population with a vaccine as an appropriate immunization means against the virus and controlling its spread, said the Royal Office statement, adding that the meeting is part of the ongoing monitoring by the King of the evolution of the pandemic and the measures taken to curb its spread and to safeguard citizens’ life and health.

According to the results of clinical studies already completed or still underway, the safety, and efficiency of the vaccine have been proven, it said.

The immunization operation would target citizens over 18, the statement said, explaining that priority will be given in particular to front-line staff, in this case health workers, public authorities, security forces and national education workers, as well as the elderly and people vulnerable to the virus. The campaign will be later extended to the rest of the population.

Morocco is “very well” positioned in the race for the supply of COVID-19 vaccines, said the statement, “thanks to the initiative and the personal involvement of the Sovereign.”

During the meeting, King Mohammed VI gave directives to ensure the smooth unfolding of the large-scale campaign, in terms of health, logistics, and technology. He stressed the importance that vaccines be available in sufficient quantities.

The King also called for the establishment of a pre-registration system for the campaign’s intended beneficiaries. He also called on authorities to remain vigilant regarding the epidemiological situation in Morocco and to update the national vaccination campaign in light of new developments.

The Royal Armed Forces will lend support to the operation that will mobilize all services and departments concerned, in particular health workers, territorial administration and security forces.

On Monday, the Ministry of Health recorded 3,170 new COVID-19 cases in 24 hours. This brings the country’s total number of confirmed infections to 259,951.

The Ministry also confirmed the highest number of COVID-19-related deaths in 24-hour, with 84 new fatalities, that bring the death toll to 4,356. The mortality rate stands at 1.7%.