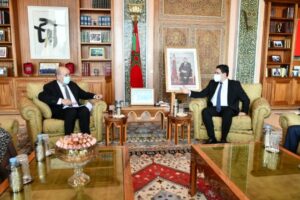 France is deeply concerned over the ongoing blockade in Guergarat, where the Polisario is hampering the free flow of commercial traffic, French Foreign Minister, Jean Yves Le Drian, said Monday in Rabat.

France is following the events in Guergarat with attention, Le Drian pointed out at a joint press briefing with his Moroccan peer Nasser Bourita. “We must get out of this situation,” he stressed.
Le Drian commended in this regard the sense of responsibility displayed by Morocco.

Regarding the Sahara issue, he reiterated France’s “consistent” position supporting the search for a “just, lasting and mutually agreed upon” solution under the aegis of the UN, in accordance with Security Council resolutions.

He renewed in this regard France’s support of Morocco’s autonomy initiative as a “serious and credible” basis for a political solution.

For his part, Mr. Bourita said that the meeting with his French counterpart was an opportunity to give him an overview of the evolution of the Sahara issue, particularly following the adoption of the new resolution of the UN Security Council.

The French official also commended the important efforts and significant contribution made by Morocco to reactivate the Libyan political process under the aegis of the United Nations, and search for a solution to the Libyan crisis.

The French top diplomat welcomed in this regard the hosting by the Kingdom of Libyan talks in Bouznika, stressing the importance of Morocco being fully a stakeholder in all international initiatives regarding Libya.

Noting that there are encouraging signals in this issue, including the maintenance of the ceasefire, he said France intends to work with Morocco to strengthen this positive dynamic. He also insisted on the need to put an end to foreign interference in this country.

Referring to the Malian issue, he said France and Morocco share the same concerns on this issue and intend to continue their coordination on Mali and the Sahel.

Le Drian underlined the need to carry on transition in accordance with the commitments that have been made.