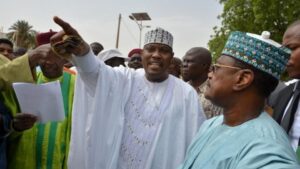 The opposition leader was sentenced on 13 March 2017 to a year in prison for handling children in particular. Impossible to erase this sentence from Hama Amadou’s criminal record, writes the president of the Court of Appeal of Niamey in a letter. Hama Amadou’s lawyer rejects his arguments and fears a manoeuvre to prevent his client from standing as a presidential candidate.
In a letter dated 9 November last and addressed to Hama Amadou’s lawyer, the former president of the Niamey Court of Appeal, Daouda Samna, the President of the Court of Appeal of Niamey considers that it is not possible to rectify the criminal record of the opponent. Hama Amadou’s conviction is “final”, he said.
Mr. Samna, who has already replied Tuesday, believes that the letter from the president of the Court of Appeal has no legal value. “It is not up to the president to accept or refuse to correct the criminal record. According to the law, when the president receives a request, he has the obligation to communicate this request to the public prosecutor’s office, the public prosecutor’s office and to appoint a rapporteur. Once this is done, the case is judged. Even if he considers that my request is unfounded, it should be stated in a court decision, not in a letter.’’
When he was contacted, he stated that he was still awaiting a response from the courts to his request for the rectification of Hama Amadou’s criminal record.
For him, the challenge is to draw a line under Hamah Amadou’s judicial past. Indeed, the electoral code stipulates that any person sentenced to one year in prison or more cannot be registered on the lists and therefore cannot stand. So this letter from the president of the Court of Appeal, “outside the legal procedures,” he said, makes him fear for the upcoming elections.
“I have serious concerns about the conduct of the elections. Nigeriens must be allowed the freedom to choose the person they want. We must not use legal tricks to prevent candidates from running».
If in the end the court rejects his application, then he promises new remedies. Proceedings to oppose Hama Amadou’s conviction are already underway.