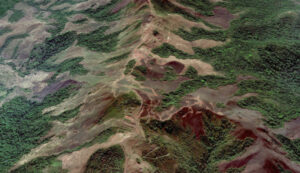 On Tuesday 10 November 2020, more than eight years after the events, the ECOWAS Court of Justice condemned the Guinean State to pay more than $460,000 in reparations to the victims.
The drama takes place during the night of August 3 to 4, 2012 in the largest unexploited iron deposit in the world: the Simandou chain, whose exploitation has just been attributed to BSG-R, a company led by Beny Steinmetz, associated with the Brazilian iron giant Vale.
The inhabitants of the riverside village of Zogota reproach the joint venture for not employing enough local workers, for polluting the site and “destroying” sacred places.
The villagers demonstrate and damage the company’s facilities. A ministerial delegation arrives at the site and the police intervene in the middle of the night, killing 6 villagers. There are also several wounded, huts set on fire and inhabitants subjected to acts of torture.
And so it is this Tuesday, November 10, that in its decision, the Court of Justice of ECOWAS found Guinea guilty of violating the right to life, the right not to be subjected to torture and the right to an effective remedy in particular.
This is a relief for Foromo Frédéric Loua, the victims’ lawyer. “Guinean justice is strong when it can attack the weakest, i.e. the citizens, but it is weak or even non-existent when it is the defence and security forces that commit serious human rights violations and we are obliged to turn to the international courts each time, so that justice is done. This decision really marks an important step forward in the rights of communities impacted by mining activities».
It is a “surprise” on the other hand for the Guinean state lawyer, Mr. Lanciné Sylla. “There was nothing in the case file to justify such a conviction. The same decision obscured the cases of physical attacks and destruction of rolling stock of which the security forces were victims. It is important to point out that proceedings were already under way before the national courts in order to establish who was responsible».
Two days after the tragedy, the “presidency” had promised that the culprits would be “punished”. An investigation was opened, “6 senior officials” of the defense forces targeted, but none of them ever appeared. The ruling could change relations between the communities, the state and the mining companies active in the region, according to Jonathan Kaufman, director of the NGO Advocates for Community Alternatives, which accompanies the victims.
A report by the Office of the High Commissioner for Human Rights largely confirms these allegations and a complaint has been filed against the company. In the meantime, the Guinean state has 6 months to compensate Zogota’s victims.