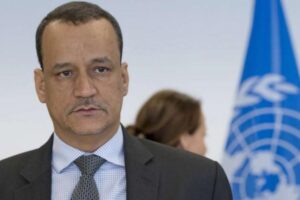 Mauritanian market have been cut from their major Moroccan supply of foodstuff after the Algerian-backed Polisario separatists barred the only road that links Morocco to Mauritania.

In a first outspoken reaction, Mauritanian government spokesman Sidi Ould Salem said that the diplomacy of his country is currently working to “find as soon as possible a solution to the crisis that persists in the Guerguerat crossing.”

“The Guerguerat crisis takes place in a demilitarized area under the control of the UN,” he said, adding “we are not parties to this conflict but we are concerned as neighbors of different parties.”

He acknowledged the disruption of Mauritanian market due to the closure of the road.

The Mauritanian news agency AMI reported that Nouakchott foreign minister had phone talks with UN Secretary general on the crisis in Guerguerat. Both parties described the situation as “serious, raising concern and that could degenerate at any moment.”

The Mauritanian minister told the UN chief that his country is undertaking good offices and urges the UN to help settle the crisis.

By blocking the Guerguerat crossing the Polisario has shown contempt for the UN and its mission the MINURSO. Reports in Moroccan media show that members of the MINURSO were mistreated by the Polisario protesters barring the road.

Many of the tents set up by nearly 100 pro-polisario protesters contain concealed arms and the Polisario has sent military reinforcement and threatened to sap the ceasefire.

In the face of these provocations, the specter of war is very possible and Morocco’s patience and restraint has come to a new test.

King Mohammed VI has reiterated in his latest speech that while Morocco remains attached to wisdom and committed to its international law obligations it will however spare no effort to defend its territories.

He also welcomed the recent UN resolution which condemned the Polisario provocations and called on Algeria to show good will as a real party to the conflict.