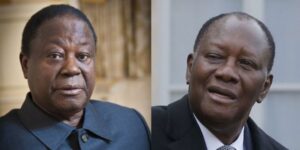 Ivorian President Alassane Ouattara met on Wednesday 11 November with the president of the opposition coalition, Henri Konan Bédié. This meeting was held two days after the televised speech of Alassane Ouattara in which he had indicated his intention to meet the president of the PDCI.
Alassane Ouattara and Henri Konan Bédié met for about 45 minutes. “We agreed that peace is the most expensive thing for both of us, and for all Ivorians,” said the Ivorian president at the end of the meeting, without giving, for the moment, more details on the content of the discussions.
The head of state said it was first of all about “restoring confidence” and that the “dialogue has got off to a good start”. The president of the Democratic Party of Côte d’Ivoire (PDCI) and representative of the opposition was not more talkative. Today’s meeting “helped break the ice wall”, he said, and that new talks were planned in the coming days. Until then Henri Konan Bedié announces that he will “take stock” of the next steps with the rest of the opposition, this Friday at noon.
It had been more than two years since the two men had met. The place of this meeting – the Hotel du Golf – is highly symbolic. It is here that Alassane Ouattara and his elder Henri Konan Bédié remained reclusive for four months during the post-electoral crisis, from December 2010 to April 2011. At the time, they were allies against outgoing President Laurent Gbagbo, and the security situation was chaotic.
This time the scenario is different. The two men find themselves in this hotel while they are politically opposed, they are engaged in a real fight, which has hardened in recent days, with the arrest of several PDCI personalities and the blockade of Henri Konan Bédié’s residence.
This blockade was lifted this Wednesday in the early afternoon. This is part of a list of prerequisites of the PDCI before the opening of any political discussions. The list, made public on Wednesday, calls for the lifting of the blockade of the residences of opposition leaders – six of them have been prevented in recent days; the release of all opposition leaders and activists, including Maurice Guikahué, the number 2 of the PDCI, and Pascal Affi N’Guessan, the president of the FPI-legal; the lifting of legal proceedings. Some 20 political leaders are being prosecuted for “rebellion against the authority of the state”, but also for “murder” or terrorism.
The PDCI also calls for an “inclusive and broad-based dialogue across opposition platforms and political parties”. The Ivorian Popular Front should not be forgotten in these discussions, nor should Guillaume Soro’s Generations and Peoples in Solidarity (GPS) movement.
The meeting between Alassane Ouattara and Henri Konan Bédié had been talked about for weeks, even before the presidential election of October 31. But diplomatic pressure increased after the election for it to be held. It must be said that the deleterious political, community and security context has not improved since the presidential election, far from it. And many expect this one-on-one to ease some of the tensions on the ground. Since the announcement of Alassane Ouattara’s candidacy in early August, political and community violence has resulted, according to an official report published Wednesday, in at least 85 deaths, including 31 since the election.