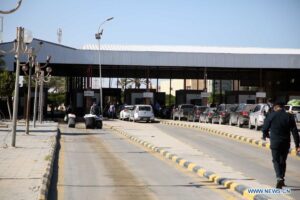 Closed in mid-March due to the pandemic, the border post between Tunisia and Libya again let vehicles and pedestrians pass through on Saturday. Flights between the two countries are due to resume this Sunday. This opening is a breath of fresh air for Tunisia hit hard by a serious economic crisis.
From Tataouine to Medenine, from Zarzis to Ben Guerdane, the economy of Southern Tunisia is directly linked to trade with neighboring Libya. The informal economy, the main activity of the region, collapsed in the last days of last winter, plunging thousands of families into misery.
Cigarettes, televisions, telephones, medicines, fuel… products bought in Libya usually flood the markets of southern Tunisia where they are resold for a few extra dinars.
The lifting of the barriers in Ras Jedir will allow Tunisian fruit and vegetables to once again feed the stalls of Libyan markets. A vital outlet for agricultural producers.
The tourist sector, on its knees, also hopes to glean some spin-offs. In Tunis, the top of the range hotels are betting on the arrival of Libyan nationals in search of medical care or on business trips when the coastal establishments, more than half of which have had to close, hope to fill desperately empty reservation books with the arrival of customers fleeing the tensions.
Trade between the two countries, which was expected to reach $3 billion this year, has been heavily impacted by the eight-month closure.
The opening of the borders is accompanied by a very strict health protocol including the presentation of a negative PCR test. A quarantine centre has been set up in southern Tunisia.

Posted by Khalid Al Mouahidi on November 16, 2020. Filed under Business. You can follow any responses to this entry through the RSS 2.0. Both comments and pings are currently closed.