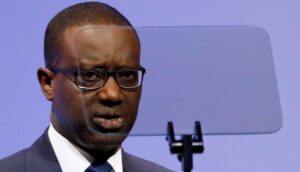 Franco-Ivorian banker Tidjane Thiam has been recruited by Rwanda to develop the attractiveness of its financial sector. The former head of Credit Suisse has been appointed Chairman of the Board of Directors of Rwanda Finance Limited, a state-owned company whose mission is to turn Kigali into an international financial centre.
Tidjane Thiam was appointed alongside Cameroonian Diko Jacob Mukete, former representative of the African Development Bank in Rwanda and Lebanon Soleman Abdi, former chief of staff of Ali Bongo. Their mission is to concretise the ambitions of Kigali, which wishes to become a gateway to the African continent for international investors.
Since the early 2000s, Rwanda has relied on services as the main lever for development. Firstly with luxury and conference tourism, but also via the financial sector with the creation of Rwanda Finance Limited in 2018. Kigali is putting forward an annual growth rate of nearly 8% and plans to put in place an attractive tax regime.
The model is Mauritius,” explains researcher Pritish Behuria. But Rwanda still lacks the financial infrastructure and qualified personnel to become a regional hub. However, the appointment of Tidjane Thiam is a sign of renewed commitment in this direction while tourism is at half mast because of the coronavirus and the country needs foreign currency inflows.