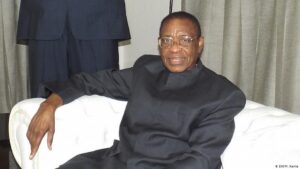 The former President of Niger Mamadou “Baba” Tandja, who had led the country from 1999 to 2010, when he was overthrown by a putsch, died Tuesday, November 24 in Niamey at the age of 82 years. A three-day mourning period will be observed throughout the country. A look back at the life of a man who remained very popular.
“The President of the Republic and the government regret to announce the death of His Excellency Tandja Mamadou, former President of the Republic of Niger, death occurred today 24 November in Niamey,” according to a statement by the presidency read on Nigerien public television. The cause of death is not specified. “A mourning period of three days will be observed throughout the national territory,” the text concludes.
A former companion of General Seyni Kountché with whom he overthrew the First Republic (1974), Tandja Mamadou is a career soldier, a charismatic man with a stern look.
After taking up arms, Tandja Mamadou entered politics in 1990. Minister of the Interior under Ali Saibou, he ruled the Tahoua region with an iron fist, and the repression of the Tuareg revolt in May 1990 in Tchintabaraden, in the north of the country reminds us of our correspondent in Ndjamena, Moussa Kaka.
He was also the one who in 2009 wanted to serve a third term, even though the Constitution provided for his retirement. Mamadou Tandja justifies this extension by saying that he wants to finish the work begun. A crisis then opened and he was overthrown on 18 February 2010 by a military junta that sent him to prison for several months.
At 82 years old, “Tandja Mamadou has just left us after having valiantly fought against death,” wrote one of the candidates in the December 2020 elections. Tandja Mamadou leaves the memory of a president with patriotism pegged to the body.
For Ali Sabo, former vice-president of the MNSD and loyal to the former head of state, the death of Mamadou Tandja is a great loss not only for the country but also for the region.
‘‘We have just lost a statesman and a sincere patriot who gave everything he could for this country and who always behaved with dignity. I remember from his actions that he was selfless in all the posts in which he served Niger. His aim was the enrichment of Niger as a whole. The internal and external debts were gigantic. In less than five years, he raised the country. In the second term, he brought in oil: not only was Niger a crude oil producer, but it now sells its refined products to all neighboring countries.’’