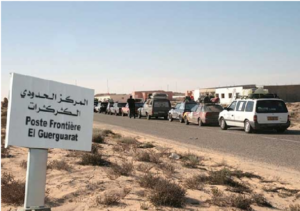 Several MEPs and eminent European politicians have called on the High Representative Josep Borell to support Morocco in its efforts to secure free movement of goods and people through the demilitarized zone of El Guerguarat.

“European parliamentarians belonging to the European People’s Party, the Socialists and Democrats, Renew Europe, as well as several political figures called on the High Representative for Foreign Affairs Josep Borell to support the revival of peace talks on the question of the Sahara under the UN aegis,” wrote the Brussels-based news portal EU Political Report.

The author of the article, Gary Cartwright, noted that these deputies “have expressed their concern over the mounting tensions following the violation of the demilitarized zone by the armed Polisario militias”.

They welcomed the establishment of a security cordon by Morocco allowing the reopening of the El Guerguarat border post, the only crossing point between Europe, Morocco and sub-Saharan Africa where more than 4 million tonnes of goods transit per year – a vital economic lifeline for the region, and a strategic link between Europe, Morocco and sub-Saharan Africa.

In recent weeks, a number of incidents have occurred in the 3.5-kilometer demilitarized zone on the border with Mauritania, monitored by MINURSO and created in 1991, the portal recalled.

“This demilitarized buffer zone has been the subject of persistent military intrusions by armed Polisario militias, paralyzing and de facto prohibiting the movement of goods to Mauritania, sub-Saharan Africa”, said the author of the article.

Despite the attempts by UN Secretary General Antonio Guterres and the concerns expressed by the international community, the reopening of the border post has been repeatedly blocked by the armed militia of the Polisario, he added.

“The Kingdom of Morocco has thus shouldered its responsibilities, after the violation of this demilitarized territory, by the establishment of a security cordon which has allowed the reopening of the border with Mauritania and sub-Saharan Africa”, the news portal noted.

The signatories recalled that it “is essential for us to ensure order in this territory and to ensure secure traffic in this strategic area”, while reaffirming their commitment to the 1991 ceasefire. “We reiterate the necessary reactions to any threat to the security and peaceful life of the region’s citizens”, they stressed, calling for the resumption of dialogue and negotiation.

Recalling that “at the end of 2018, two UN meetings held in Geneva and bringing together all the parties to the conflict made it possible to progress in a perspective of peace”, they urged Borrell to do everything possible, vis-à-vis representatives of the 27 EU Member States and the European Parliament, to ensure that a new round of negotiations is swiftly organized by the UN.

They called on all parties to the conflict to redouble their efforts in a political process of peace, and to resume this reopening of negotiations on the basis of clear parameters involving the real parties to this regional dispute.