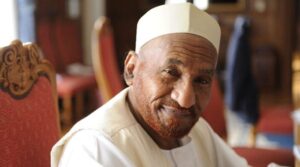 The last democratically elected Sudanese head of government, Sadeq al-Mahdi, died on Thursday of Covid-19. The head of the Umma party had been overthrown by the military coup of former leader Omar al-Bashir in 1989.
Sadeq al-Mahdi was transferred to the United Arab Emirates on 3 November, along with several members of his family and leaders of the Ummah party, where he had since been hospitalized. He died at the age of 85 yesterday Thursday and will be buried on Friday in his hometown of Umdurman.
The descendant of a prominent Sudanese political family had studied economics at Oxford. He entered politics and was twice prime minister. First in 1966, then again in 1986, after the elections organized by President Siwar al-Dhahab. But three years later he was overthrown by the military coup of Omar al-Bashir.
His Ummah party, founded by his grandfather during the British mandate, was the largest of the opposition. A fierce critic of Omar al-Bashir’s policies, he was imprisoned four times and then forced into exile for a long period.
Returning to Khartoum in 2017, he then presided over Nida’al Sudan, a coalition of political parties and armed groups engaged in the revolution which, with the support of the army, will bring down Omar al-Bashir.
Sadeq al-Mahdi, a wise imam and thinker, had recently warned against “a seizure of power by the military” and called for the disbanding of the rapid intervention militias and their integration into the forces of law and order.
Regarded by many as the “icon of democracy” in Sudan, he led his last fight from his hospital bed to oppose the normalization of relations with Israel.
Sudan deplores a great loss, especially at this decisive moment for the country. The Sudanese government has announced three days of mourning. “We have lost in him a thinker and a wise man,” said the Forces for Freedom and Change, of which he was a member.