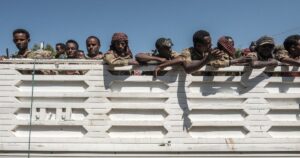 The battle of Mekele is said to have begun. The Prime Minister announced that the 72-hour ultimatum given to the TPLF and the ruling Tigray region had expired. The army was therefore ordered to conduct the “last phase” of the offensive launched on 4 November.
The federal army is said to be on the verge of attacking Mekele, the heart of the TPLF’s power. Ethiopian Prime Minister Abiy Ahmed does not hide his confidence by declaring that thousands of Tigrayan soldiers and militia men had surrendered. However, this information is impossible to verify because the region remains cut off from the world.
On the Tigrayan side, Getachew Reda, adviser to the presidency, spoke to him of a “popular war where each inhabitant will defend himself, whether he carries a weapon or not. Concern is therefore at its height, when the capital of Tigray has half a million inhabitants and the Prime Minister has already announced that the assault would be “merciless”.
The UN has reported that the population is fleeing the city, but it is difficult to know how many people are fleeing. They are already reportedly suffering severe shortages of fuel, food and medicine.
Human rights defenders call on the parties to spare the population as much as possible, recalling that international humanitarian law applied in this internal conflict in Ethiopia.
Anticipating criticism, the Prime Minister explained that the army would be “particularly vigilant in protecting civilians. That all precautions would be taken to protect heritage, places of worship, infrastructure and residential areas”.
But given the intensity of fighting in the rest of the region, the high number of victims, the use of fighter planes and tanks, Abiy Ahmed’s words are far from reassuring.