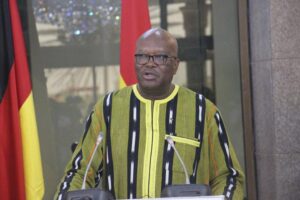 Four days after the double polls on 22 November, the Electoral Commission announced the provisional results for the presidential election. The outgoing president won a large victory with 57.87% of the votes cast in the first round of the election.
The presidential camp was dreaming of a knockout blow. It is now a reality. Roch Marc Christian Kaboré, with nearly 58.87% of the votes, won the first round for a second mandate. A close associate of the president now hopes that this clear victory will remove arguments to the opposition to contest these results. “I will be the president of all Burkinabè,” reacted Mr. Kaboré on Twitter.
Two heavyweights of this opposition follow. Eddie Komboïgo, the candidate of the CDP, the party of former president Blaise Compaoré, comes second with 15.48% of the vote, while Zéphirin Diabré of the UPC takes the third step of the podium with 12.46% of the votes. To find out who between these two men will become the leader of the opposition, we must now wait for the results of the legislative elections that will give the mapping of the National Assembly.
As for the ten other candidates, they share the remaining 14%. Kadré Désiré Ouédraogo, is fourth with 3.36%. Tahirou Barry gets 2.19%. While the former Prime Minister of the transition Isaac Zida only has 1.52%.
The participation rate is 50.79%, according to the Electoral Commission. This figure is a clear drop compared to the last presidential election of 2015, during which the participation rate was 60%.
A large proportion of the candidates were not present or even represented when the results were announced, a sign that the political frictions that have arisen in recent days have not completely subsided. Nevertheless, the opposition candidates announced that they had taken note of the results. They also declare that they reserve the right to resort to legal channels for disputes and that they have the will to preserve peace. They do not call to the streets either. They say also they “want to put the best interests of the nation above all other considerations”.
The composition of the new National Assembly, however, is not yet known. The Electoral Commission has until Sunday to publish the results. The results of this double ballot – presidential and legislative – are still provisional. The Constitutional Council will have to validate them once all appeals, if any, have been exhausted.