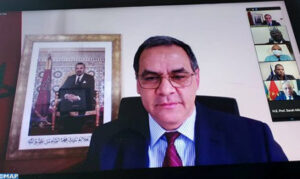 Morocco underlined, Friday in Addis Ababa, the paramount importance of regional integration at the level of Regional Economic Communities (RECs) as an essential step to ensure the success of continental integration, sought by the African Continental Free Trade Area (AfCFTA).

Speaking at a meeting of the African Union Permanent Representatives Committee, in preparation of the 13th AU Extraordinary Summit on the AfCFTA, that will officially launch the start of trade under the AfCFTA agreement on January 1, 2021, Morocco’s Permanent Representative to the AU and to the United Nations Economic Commission for Africa, Mohamed Arrouchi, stressed that since Morocco’s return to the AU, the Kingdom’s vision targets the development and unity of Africa and strengthening the bonds of brotherhood and friendship between all the countries of the continent.

“Morocco’s continued commitment to all the flagship projects of our pan-African agenda, in particular the AfCFTA, emanates from its conviction that their achievement will serve the African citizen”, underlined Arrouchi who was speaking by videoconference.

The Moroccan diplomat noted that the outcome of the continental integration process sought by the AfCFTA rests on a number of prerequisites, in particular the need for regional integration at the level of the existing Regional Economic Communities (RECs).

The vital interests of the African citizen must be at the heart of this process, he said, emphasizing the importance of the AfCFTA in safeguarding these interests.

The Moroccan diplomat underlined further the importance of associating, from the start of this important process, young people and women for a better inclusiveness and efficiency of continental integration.

He noted that out of the 1.27 billion citizens in the African continent, 40 pc are under 25.