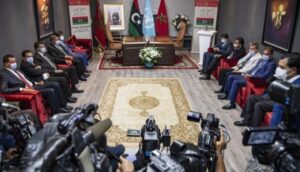 The Libyan House of Representatives and the High Council of State expressed, Tuesday in Tangier, their attachment to the Libyan character of the political process and to work in accordance with the mechanisms provided for in the Libyan political agreement as well as the related Security Council resolutions.

The two parties also underlined, in the final statement issued following two days of consultations held as part of the coordination meeting between the delegations of the two institutions under the formula (13 + 13), the need to increase direct meetings and adopt them as an efficient and transparent tool to deal with issues that hinder the unification of state institutions, put an end to division and stop foreign interference.

The final statement, read by MP Aicha Chalabi, expressed the commitment of the two parties to building a civil state, highlighting the need to extend the authority of the state over the whole Libyan territory and launch national reconciliation, transitional justice as well as the return of refugees and displaced persons inside and outside the country, in safety and dignity.

The two parties also expressed their commitment to supporting the efforts of the United Nations mission to end the conflict and division in Libya, which will be crowned by the implementation of constitutional deadlines and the holding of general elections to put an end to the transitional period, reach a permanent phase and achieve stability within the framework of the rule of justice and law.

The two delegations expressed their sincere thanks and gratitude to King Mohammed VI for his high solicitude, and for the efforts of the Moroccan government aimed at helping the Libyans overcome the crisis. They welcomed the positive impact of these efforts since Morocco hosted the inter-Libyan dialogue in 2015, the dialogue sessions in Skhirat and Bouznika, then the consultative meeting of the Libyan House of Representatives, held recently in Tangier.

The meeting in Tangier between the Libyan HoR and the High Council of State focused on the means to implement the consensus previously reached by the two parties regarding the implementation of Article 15 of the Political Agreement and the unification of the sovereign institutions, the statement said, announcing the formation of a reduced working group from the two delegations, which will begin its work to this end in the coming days.

According to the final statement, this meeting is part of the application of the Libyan Political Agreement to overcome the situation of political division and its repercussions, and aims to increase the chances of success of the political dialogue conducted under the aegis of the United Nations Support Mission in Libya.

This meeting also provided an opportunity to discuss the proposals made by the United Nations Support Mission in Libya in terms of selection mechanisms for positions of executive power during the preliminary phase. The final statement thus underlined that the two parties affirm the need to choose a transparent, fair and balanced mechanism, so as to allow each region to propose more than one candidate for each post.