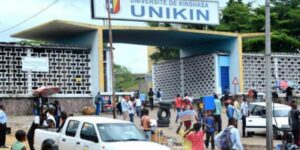 Thirty-nine professors from the University of Kinshasa, the largest in the country, have died since January. Illness, poor medical care and difficult working conditions are among the causes, according to the UNIKIN professors’ association. This is the first time the university has reached these figures in a year. In Kinshasa, the situation is worrying in university circles.
Contrary to what some have put forward as reasons, the coronavirus is not the only cause of this excess mortality. According to the Association of Professors of the University of Kinshasa, perhaps six people have died from Covid-19. Most of them died during the period of the confinement of the city of Kinshasa. Some who were ill were unable to travel abroad, as the borders were closed for about four months.
The teachers also complain about the lack of government support for medical care. Moreover, the structure that used to act as a mutual health insurance company that occasionally reimbursed drug bills no longer exists.
There are also the difficult working conditions for these teachers, most of whom are over 60 years old. There are about 1,100 professors for a student population of almost 30,000 at the University of Kinshasa alone. To this must be added the fact that many of them teach in several other universities in the country.
In September, they were received by Félix Tshisekedi. The Head of State had promised to get involved so that solutions could be found. The teachers are still waiting.